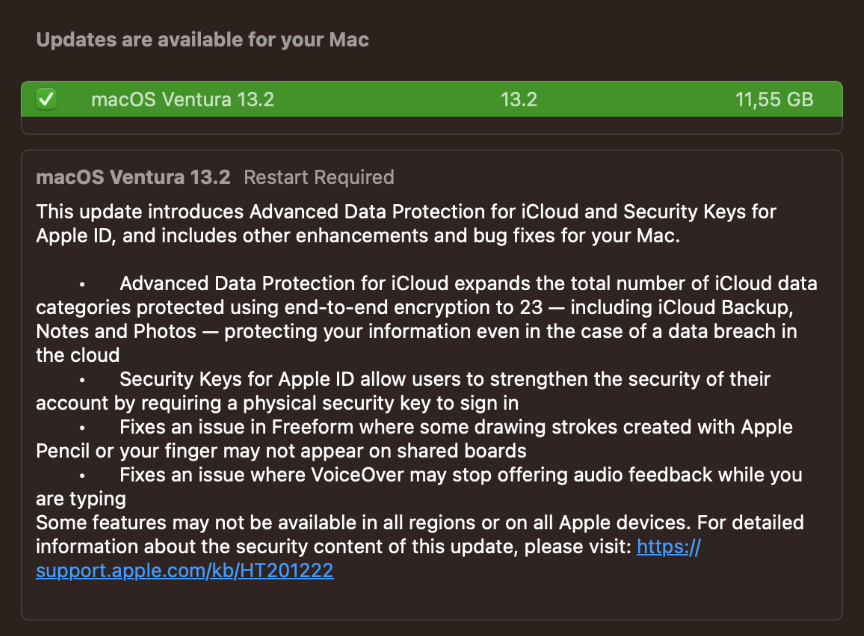 Security Updates for your systems.

For Mac users, macOS Ventura 13.2 is available, as well as Monterey 12.6.3 and Big Sur 11.7.3. For iCloud, Apple is now introducing end-to-end encryption for cloud backups, notes and photos features. I.e. not even Apple is able to decrypt data uploaded by you.

iOS 16.3 also introduces this end-to-end encryption and fixes a few bugs. Also, for the new iPhone 14 series, you now have to press a different key combination to trigger an emergency call. The previous automatic detection was probably too vulnerable and led to many false positive alerts.

Unfortunately, there are no hints of a fixed HomeKit. The last update for the new Matter environment had so many bugs that it was withdrawn. Version 16.3 probably doesn’t help there currently either.

Nevertheless, there is a new HomePod version (which also includes the new large HomePod) as well as watchOS 9.3 and tvOS 16.3.

Old smartphones have not been forgotten either: Devices still running iOS 15 get version 15.7.3 with security patches.