The Apple Watch is currently sold in three versions: Series 3, Series 7 and Apple Watch SE, with the latter two also optionally available with mobile connectivity. GPS is always on board. There are also the Hèrmes and Nike series as well as different case materials.

Watch out if you are still using an old iPhone with iOS 12: Apple forbids pairing a new Apple Watch.

When to buy an Apple Watch? 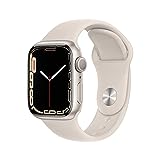 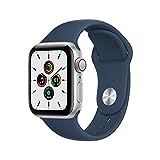 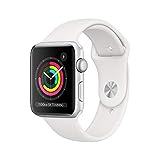 The cheapest variants are available from 213 Euros. These come with an aluminum case, so they are lighter than the stainless steel variants and come with plastic wristbands. These models are waterproof up to 50m and are able to receive a GPS signal even without an iPhone.

These entry-level devices are suitable for users who actually want to use the smartwatch mainly as a watch or GPS tracker and can do without the new medical function. However, the display will also be a bit smaller.

There is also still a Nike edition of the Series 3 for all fans of jogging. The Nike variant offers special Nike watch faces, a perforated wristband and an ideal connection to the Nike+ Run Club app. The models cost 229 euros and 329 euros, respectively, and have a GPS chip on board; cellular connectivity is optional. This makes it possible to track a run or swum route even without an iPhone.

The display of the Apple Watch SE offers a lot of additional display space, but it is not an always-on display, just like the discontinued Series 4. To be honest, this is not a big disadvantage in everyday use. It is nice to have, but not really necessary.

In addition, the display is no longer exactly square compared to the older Series 3, but rounded, similar to the iPhone 11. This also gives the somewhat flatter smartwatch a very pleasing look. We are happy to accept that the processor is faster since the SE.

Series 3 for sport and normal use,
Apple Watch SE for more style and speed.

The digital crown, i.e. the small dial on the right side, has haptic feedback in the Apple Watch SE – the Series 3 does not generate this. Similar to the iPhone with the Taptic Engine, the Apple Watch now also provides mechanical feedback when scrolling through the menu. Very pleasant.

Watch can record the pulse, but it cannot create an ECG, and the new function of measuring oxygen in the blood is also reserved for the Series 7. Nevertheless, the SE is a nice Apple Watch that offers modern design at a fair price.

You can clearly see that the SE and Series 7 share a modern design, but the display area is much larger.

The main difference to the two cheaper Apple Watches is the health functions offered. The Apple Watch 7 is able to create an ECG of your heart as well as measure and monitor the oxygen saturation of your blood. For this purpose, four LED clusters and four photodiodes are incorporated at the bottom of the watch, which allow it to collect the information. In simple terms, the Apple Watch Series 7 looks at the color of your blood and can determine the oxygen content of your heart.

Apple continues to expand the Apple Watch with medical functions. Since the ECG function already works flawlessly and is very helpful for many people, the same can be expected from the blood oxygen saturation function. So, if monitoring your health is very important to you, the surcharge from the Apple Watch SE to the Series 7 is not worth considering and can almost be called cheap for the power of the functions.

By the way, the difference to the older Series 6 is not that big: the Series 7’s processor is exactly the same and even the internal product designation has remained the same. In principle, only the display has changed. A nice but comparatively small update.

We assume that Apple actually had bigger changes in mind, but could not implement them due to current restrictions. Thus, it remains with slightly more pixels and faster charging.

Beginners, style, health – the focus of the three models

The main advantages of the new Series 7 is the beautiful large always-on display as well as the possible health functions oxygen saturation and ECG. The Series 7 brings all the good features of an Apple Watch plus extensive medical technology.

The Apple Watch SE leaves out these features as well as an always-on display for a lower price. In return, you get a stylish Apple Watch that is up to date.

The Series 3 is not slow, the material quality and design are still excellent, and the operating system is also still maintained. Due to the low price, it is the right choice for those who rather value the offered features for sports and notifications and can do without the latest design and the ECG function. However, the model is slowly getting on in years.

If you are happy with the Series 3, SE or Series 7, many people still have to decide whether to choose an aluminum or stainless steel case – after all, the Apple Watch is also an accessory. Titanium and ceramic are also available as casing materials, but most people will decide between aluminum and stainless steel.

In addition to the higher price for the stainless steel, two properties are simply decisive. First, the stainless steel version is significantly heavier. Really noticeably. You notice that the watch really weighs something when you wear it. For many, that is a sign of value – and it is. However, if you want to have as little weight on your arm as possible during sports, you should choose the aluminum version.

The second factor is the surface finish: The stainless steel variants in light and dark are very shiny, all aluminum colors are matte and have a different character. You should use these two properties to make your decision if price is not an issue.

The Series 7 is high tech, the Series 3 is getting old. Apple’s pricing is very fair: for about half the price, you don’t get all the features, but you’re still good for everyday use. So you won’t miss out on anything essential if your budget is limited. If you can afford it, you get the more interesting always-on display and a somewhat fresher design in the Series 7, while the SE offers current technology without more extensive health features.

If you are interested in getting a cellular variant so that you can make calls with the Apple Watch, you will need a corresponding contract. One with a multi-SIM should be sufficient. Since the watch has an eSIM, i.e. a built-in SIM card so that you do not have to insert a small piece of plastic into the smartwatch, your provider also has to play along.