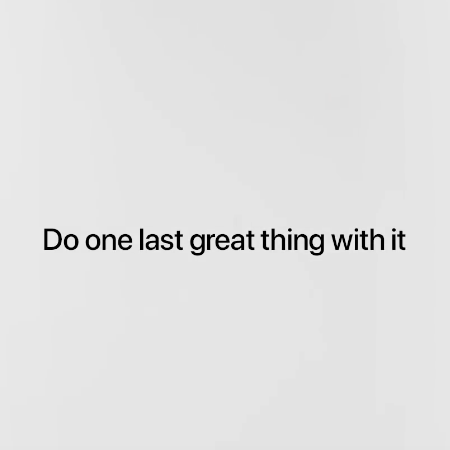 Apple promotes its own trade-in program for older iPhones with an emotional video.

The trade-in program was created to boost the sale of new iPhones. If you give up an old iPhone, you get a discount on a new one. We’ve written about it here before.

But most of the time it’s worth it to just use the iPhone longer (as millions of users do who just have the battery replaced), to give it to family and friends or simply to sell it privately. For simple tasks, iPhone 5s or 5s are sufficient. But since the trade-in program only starts with an iPhone 6, it is hardly worthwhile for most people to take advantage of this offer.

If money doesn’t matter to you, it’s the best way, and this has to be emphasized, to put electronic waste in good hands. For one thing, Apple attaches great importance to correctly disassembling and recycling the devices. As they contain many valuable materials and recycling is cheaper than mining, Apple is simply interested in collecting old devices. Secondly, Apple has managed to supply almost the entire organization and many suppliers with renewable energy. A recycling of a device should not cause any further CO2 pollution.

Conclusion: of course Apple wants to earn money and sell a new iPhone. Therefore you should calculate yourself beforehand whether the offer is worthwhile for you. The positive aspect of Apple’s offer is that the devices are actually properly recycled and climate-neutral. So even if you don’t want to accept the trade-in program, but have an old iPhone that you have to dispose of, bring it to Apple. That way, you’re at least sure that it is not going to end up somewhere in Africa due to widespread disposal practices. Apple takes the handling of discarded equipment very seriously.