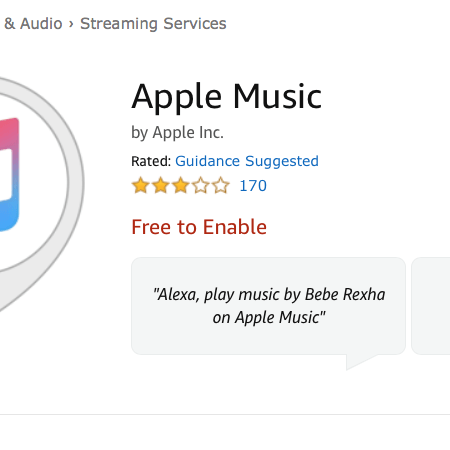 Apple cooperates with Amazon on music streaming: On the Alexa devices Apple’s streaming service can now be activated via a new skill.

This makes it possible for the first time to use the streaming service on a non-Apple device. With Amazon’s Alexa devices, such as echoes or Fire TV devices, functions from third-party manufacturers can be loaded via skill. Now Apple makes use of this method – no HomePod is necessary anymore to use Apple Music.

This is quite a surprising turn of events, because Apple is a hardware company and earns money with it. But it seems that the ability to generate more streaming subscribers is more important than more HomePod sales.

But the function doesn’t seem to be mature yet, if you look at the comments on the US Amazon page: iTunes Match is apparently not available, it doesn’t seem to work on a Fire TV and Sonos speakers aren’t compatible yet either. Maybe that’s why everybody in any country outside the US can be happy that this option isn’t yet available: yiz can look forward to a mature system when it’s introduced worldwide later.