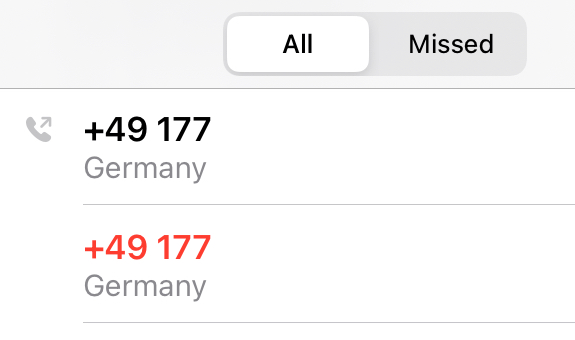 The display of fake telephone numbers should decrease – but not the scam itself.

Starting tomorrow, new legal regulations for better protection against so-called call ID spoofing will come into force in Germany. Call ID spoofing is the display of a caller’s phone number which is fake. Ironically, that happened to us today (see screenshot). It was interesting that after calling back the number was given as not assigned at all.

This type of concealment of origin is often used to call from abroad in order to then commit telephone fraud. For example, you pretend to be the police or a relative who urgently needs money. It is very difficult to break the habit that caller phone numbers are believed to be secure, they are easy to trust. However, the telephone network does not provide for callers’ numbers to be checked in any way, so something else can be displayed.

The regulation that will come into force in Germany from tomorrow now states the following:

This should at least mean that the phone number for the police can no longer be displayed forged. However, as you can see, the exception applies to international roaming. We see the gateway for exactly what happened to us today: it will probably not change at all. The Federal Network Agency expects that more fraudster calls will come without a phone number being displayed, so that one is at least somewhat forewarned, but it remains to be seen whether this will bring a significant improvement.

Hence our tip: Always keep in mind that all caller numbers can be manipulated extremely easily. Take them as a clue and don’t believe them. If you get a call from someone who insists they didn’t call you, their number was probably being misused. Also, get used to turning the tables: If someone pretends to be the police or another official body, simply ask for their number and authority, and check whether they even exist and call the operator directly and ask for the person. The fraudsters cannot then be reached – after all, they do not exist in their claimed role.

As always: be careful, don’t let yourself be taken by surprise and ask questions. If the other side gets rude or wants to put you under pressure: hang up.

15. December 202224. January 2023
Manage Cookie Consent
We use only one analytics service if you agree (Pirsch in Germany).
Data will not be shared with anybody else.
Manage options Manage services Manage vendors Read more about these purposes
View preferences
{title} {title} {title}