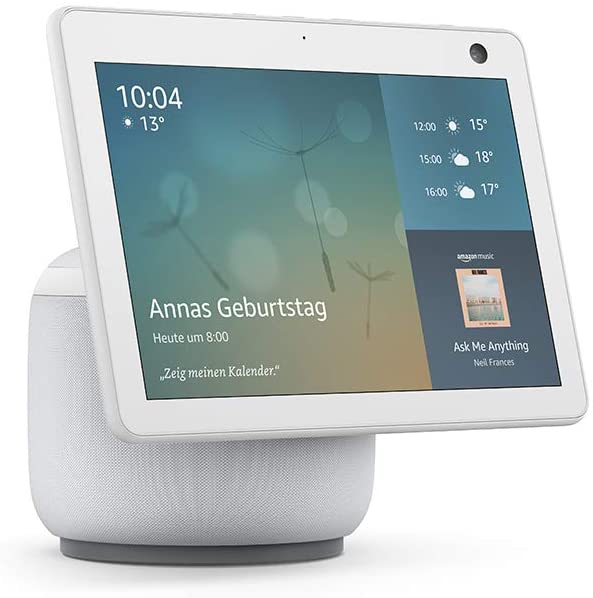 The third generation of Echo Show with screen has a good trick up its sleeve: the screen orientation adjusts automatically depending on where you are standing. So if you move around during video telephony or need to look at a recipe while cooking, the screen is always correctly adjusted.

Moreover, the largest model among the Echo devices comes with an integrated Smart Home Hub. You connect your Zigbee devices to it. So the Echo Show 10 covers pretty much all the requirements of a modern household appliance.

The fourth generation of the Amazon Echo comes in a spherical shape. Completely round and geometrical it differs clearly from its predecessor. In addition, Amazon is now placing value on sustainability: many materials are to come from recycling. A good step in the right direction, we think. We usually also have a Zigbee Hub on board the device, so that smart home devices can be connected directly.

Even the smallest Amazon Echo comes as a sphere. As usual there is one model with and one without LED watch, which is a little bit cheaper. This new model is said to have improved the sound even more in contrast to its rather flat designed predecessor.

There are also new versions of Amazon’s Fire TV Stick: it is now 50% faster than its predecessor with a new quad-core processor. It is suitable for 1080p streaming and 60 frames per second.

The difference to the Fire TV Stick lite are two points: first, it does not support the Dolby Atmos sound format, second, the remote control has fewer buttons – you cannot control your TV with it. If you don’t want to miss these two functions, you have to pay the small extra charge.

Amazon extends the Blink Camera series with a model called Blink Outdoor, which is intended for outdoor use. It is weatherproof and should last up to two years with two lithium batteries. Of course it is fully compatible with Alexa.