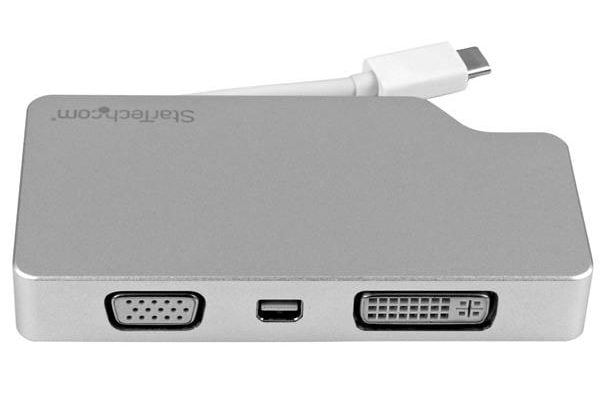 The introduction of USB-C or Thunderbolt 3 ports creates quite a complex problem: How to connect a monitor with Mini DisplayPort that has more than 1920 x 1080 pixels?

Why is that? The idea to let every protocol run over one mechanical port is used with Thunderbolt 3 also. With this new standard, a new plug was introduced, too: USB-C. Thunderbolt and USB – is it the same? The different lies in the mechanical construction and the protocols used.

USB-A, USB-B and USB-C only define the mechanical connector. Everybody knows a USB-A port, the little rectangle on every device there is. The newest version of this connector now is USB-C. Is has the advantage, that you don’t have concentrate on the direction how you plug the cable in, much like Lightning. Be aware: this only describes the mechanical ports and plugs, we don’t know anything about the usable speeds yet! Apple delivers the new MacBooks with a USB-C power supply and a USB-C cable. This uses the newest connector, but slow speed, if you use it for data transfer: only USB 2.0 speeds are possible.

So remember that you can not know what speeds a USB-C port supports if you don’t now if it is a USB-C port with USB 3.1 standard (or even slower, on smartphones for example) or a Thunderbolt one. This can save you time and trouble, for example if you try to connect Apple’s Thunderbolt 3 (with USB-C plug) to Thunderbolt 2 adapter to the 12″ MacBook. This will fit mechanically, but as the port only delivers USB 3.1 and not Thunderbolt signals, it happens: nothing. The adapter can only give out what the port delivers. The problem in everyday use will be that you can not identify a protocol when you see the mechanical connector. With older standards, this is possible: an Ethernet connector uses a network protocol, an HDMI port delivers display signals and so on. A USB-C port though can deliver USB 2.0 speeds, USB 3.1 Gen 1 and 2, Thunderbolt 3 as well as alternate modes for other graphic signals. There is no way to identify the ports capability by just looking at it. The standard misses out on this point. The same problems arises with cables, but that is another story.

Back to the problem: Let’s say you have an external monitor with a resolution of 2560 x 1440 pixels and you had it connected to your Mac via a Mini DisplayPort connection. This could be an older 27″ Cinema Display or any other monitor. Now you own a new MacBook Pro with Thunderbolt 3 connectors. You think “That is not a problem! I just learned that Thunderbolt supports a lot of protocols, like DisplayPort!” and you buy Apple’s Thunderbolt 3 to Thunderbolt 2 adapter. Until here, you mood is very good, because you learned something, you get the protocol thing and you bought the right adapter.

If you look into the fine print of Apple’s Thunderbolt they really do tell you that this thing does not support DisplayPort signals. All official. It would have been nice though to give this information also on the shop site. This adapter only works for the Thunderbolt Display. 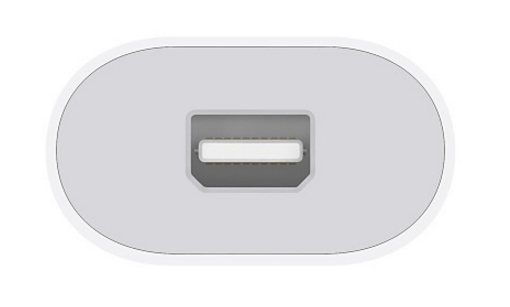 What you can do with this adapter though is using an existing Thunderbolt 2 Dock and connect the monitor to it. Some comments on Apples site show that this could work. The resolution is maxed out at 1080p though – not good enough. If then don’t want to use a dongle but a Thunderbolt 3 to Thunderbolt 2 cable, you are out of luck. These don’t exist. Next option would be using a Thunderbolt 3 dock with Mini DisplayPort, which then gives the correct signal to the monitor. Fun fact: this seems to work. So the DisplayPort signal is there, it is just surpressed by the adapter. Even the Mini DisplayPort-to-Dual-DVI adapter for the old Cinema Displays should work. So we get the impression Apple does not want to support third party monitors. If you have experience with this adapter, please share them with us below in the comments!

So you don’t want a huge dock and you need a portable solution? How about one of these neat USB-C travel docks? You lost again, there is none out there supporting Mini DisplayPort. There doesn’t seem to be a chipset that is running stable with USB-C. So we are again in need for an adapter. You can find cheap USB-C to Mini DisplayPort adapter, these often times only support 1080p though. 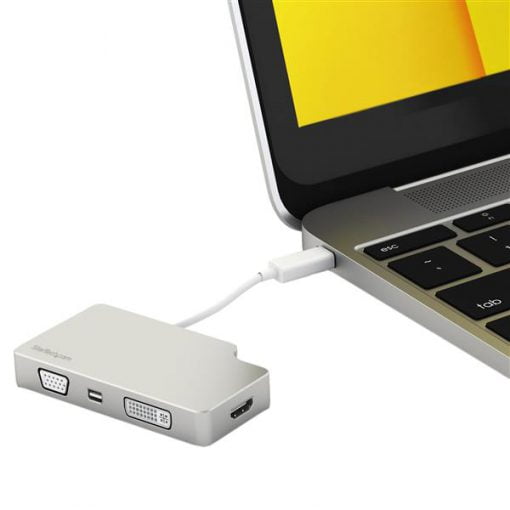 But one adapter we found. StarTech produces a USB-C to Mini DisplayPort adapter. No Thunderbolt, but who cares. We need the DisplayPort signal, everything we don’t care about. This is a purely graphics solution. The supported resolution is 3840 x 2160 pixel and you get not only a port for Mini DisplayPort but also for DVI and VGA. The only disadvantage here: your Thunderbolt Display won’t run on this one. 😀

To round up this unpleasant subject: Apples Thunderbolt Adapter also doesn’t work together with other adapters that need the graphics signal. If you try to connect a Mini DisplayPort to HDMI or -VGA you will also get no signal. Furthermore, devices that need power delivered over the Thunderbolt port don’t work either. Only a pure Thunderbolt data signal is provided.