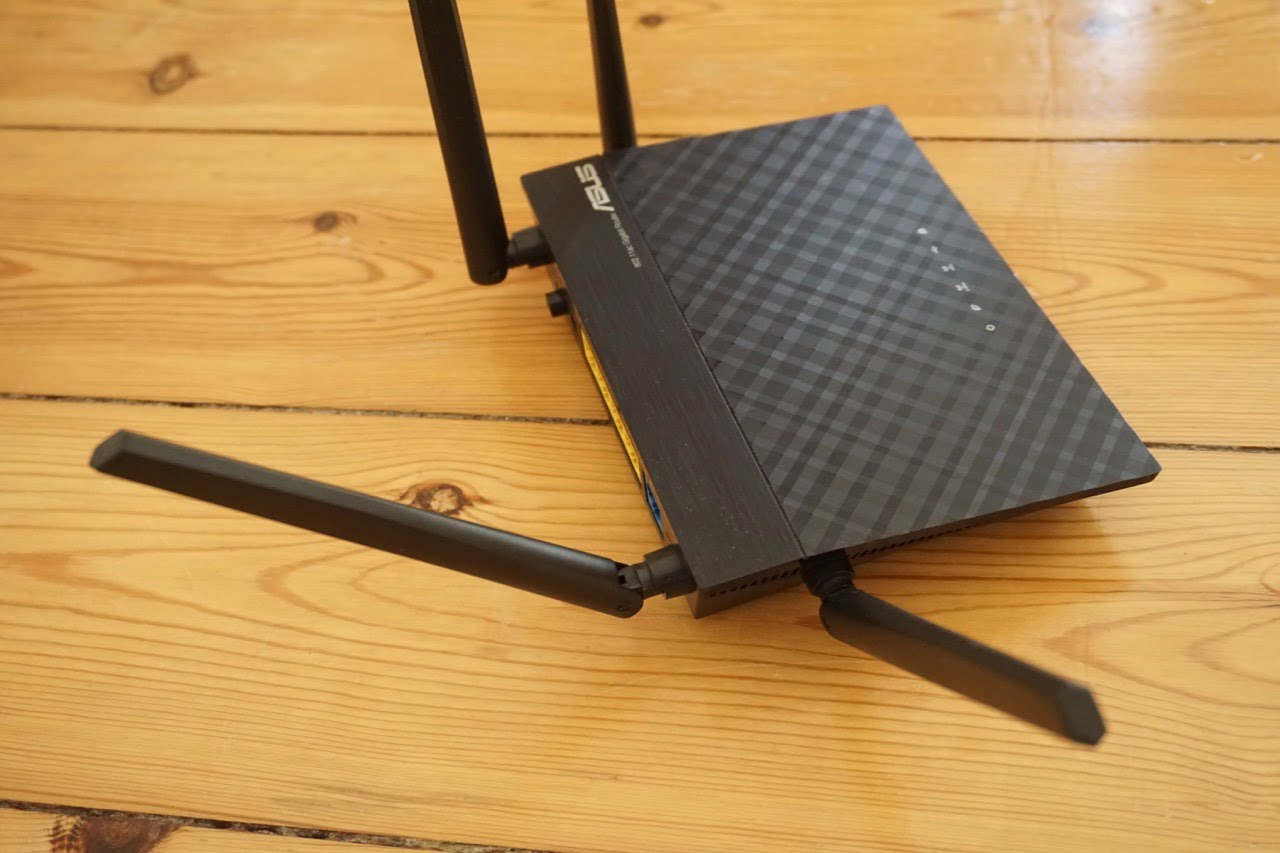 “I need a wireless router.” “What kind?” “A normal one.” If this conversation sounds familiar to you, we have an Asus router that fits.

Info: We tested the European model RT-AC58U. This is technically identical to the RT-ACRH13.

The RT-ACRH13. A contemporary router

But what is this, a “normal” router? Now let’s say it doesn’t have to be a model that is as expensive as possible and has all the features of the world, but it doesn’t have to be the money saver either, because you want to work with it sensibly. In addition, it should fit to the existing equipment. 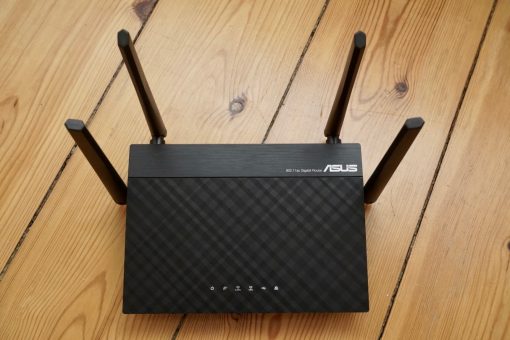 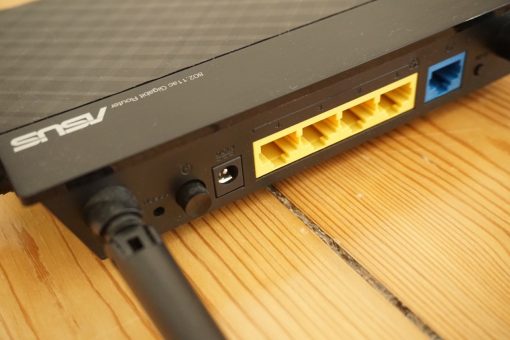 The RT-ACRH13 meets exactly these requirements. It offers ac-WLAN, supports two streams simultaneously (like the Apple Macbooks except those with TouchBar, which support three), has gigabit ports to connect wired devices and is equipped with 128 MB flash and 128 MB RAM, so that a good performance is possible. In addition, the flash size allows you to change to OpenWRT in a few years.

AsusWRT is well set up and offers many options

Asus’ operating system AsusWRT offers many and extensive functions, but is quite well structured and still looks reasonably good. We won’t go into the setup of the router, it’s simple enough, even if you don’t want to use the RT-ACRH13 as a router but only as an access point, which translates the wired network into WLAN. 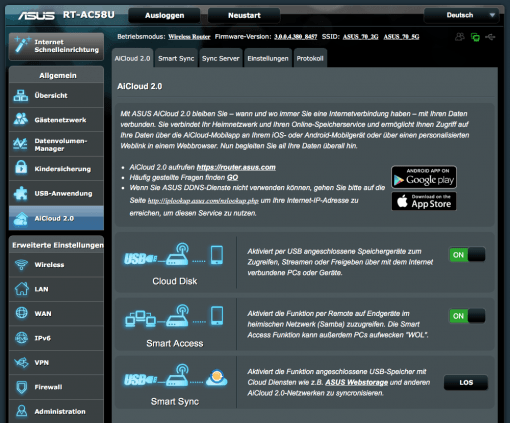 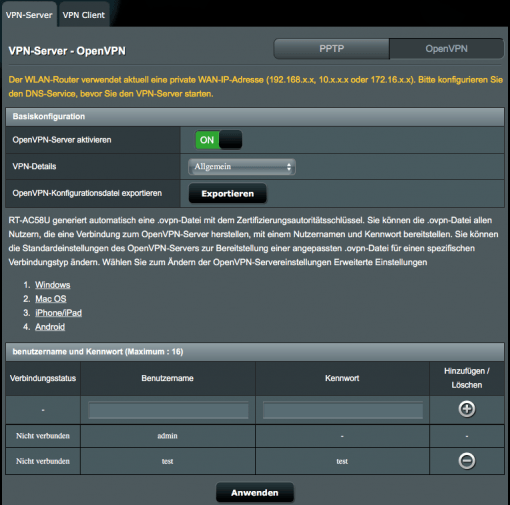 However, it should be mentioned that Asus offers an iOS app for the router with which all settings can also be made via smartphone. This works well in practice. You have access to all functions provided by the router via app, and there are a lot of them. One of the more practical things to do in everyday life is to set up a guest network whose access code is displayed directly as a QR code so that your guests can photograph it. 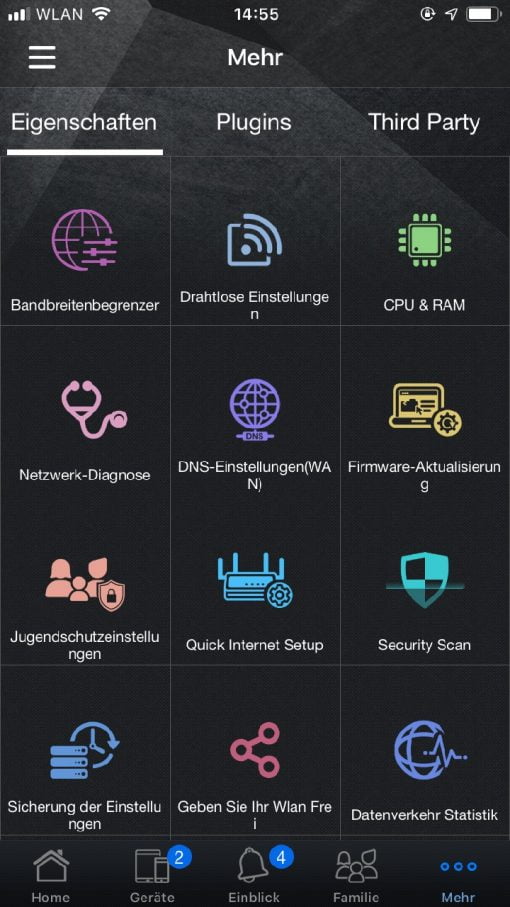 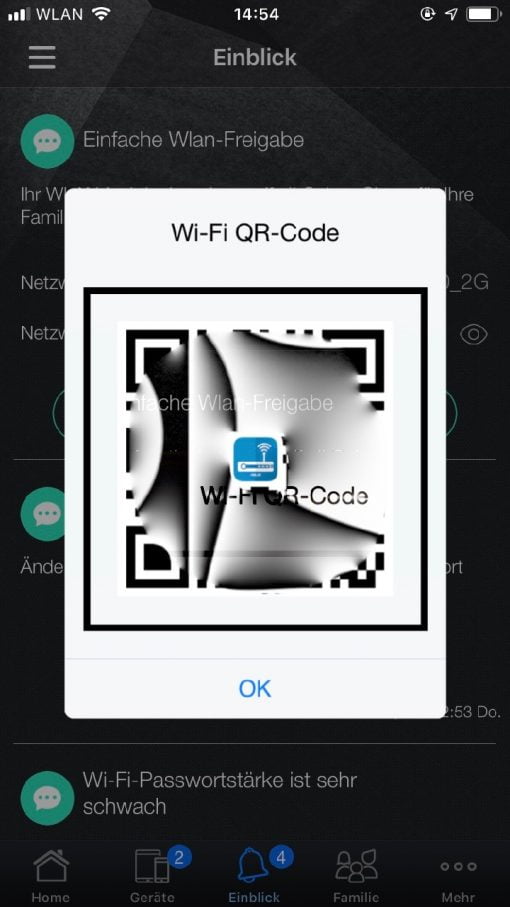 Asus also provides the extensive Ai-Cloud, which we have not further tested here. This gives you the option of synchronizing your content, which is connected to the router via USB, via the cloud as well. An alternative offer if you don’t want to use a cloud solution or Synology. If you use this offer you are then logically committed to Asus.

Very good WLAN performance, OpenVPN with only one core

The WLAN performance of the Asus RT-ACRH13 was very good in our tests. As you know, we always test near and far. Far means two rooms away with some metal in between, so this measurement is difficult for all routers. The Asus did extremely well, though. 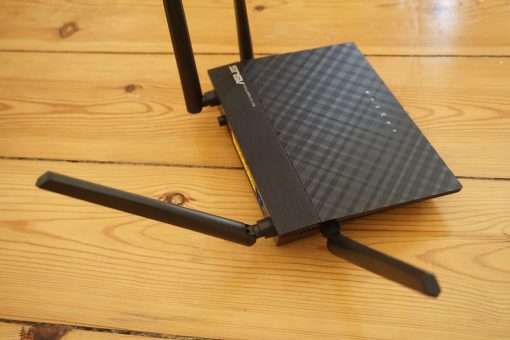 The WLAN n measurements at 2.4 GHz are already good and significantly better at close range than the low-cost brother RT-N12, the ac measurements at 5 GHz even outstanding: The router managed in combination with a 12″ Macbook, which only supports two streams, to still transmit the 200 MBit/s through the walls during download. Since this is what you want from a router, we can make our recommendation here.

For comparison: the router is also above the values of the Tenda mesh system and the old AirPort Extreme. 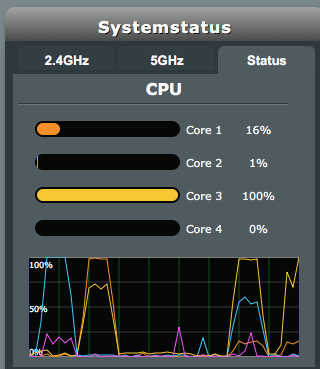 The NAT throughput is on current level and decreases significantly when hardware acceleration is switched off (this is normal). Since VPN connections are becoming more and more interesting (and sometimes necessary), we have also measured these. The Asus was the server. If it functions as a client, then the performance is approximately on the same level due to the encryption, possibly slightly higher. In these measurements with OpenVPN, the router achieved about 33 MBit/s. One core was fully loaded, the other three did nothing. Apparently the OpenVPN instance only runs as one thread, but the achieved throughput is high enough to run Netflix in 4K over a VPN.

The four antennas of the router as well as the good internal values thus contribute to very good radio behaviour in practice. The device is smaller than you might think: it is only slightly larger than the compact radio cubes of the Tenda Nova ME3 Mesh System. In addition, the Asus design with its corrugated surface offers an attractive appearance. The arrangement of the antennas at the rear and on the side additionally loosen up the appearance. This means it can also be seen as a furnishing item, unlike many other modern routers which are designed as if they have to attract attention in order to function. 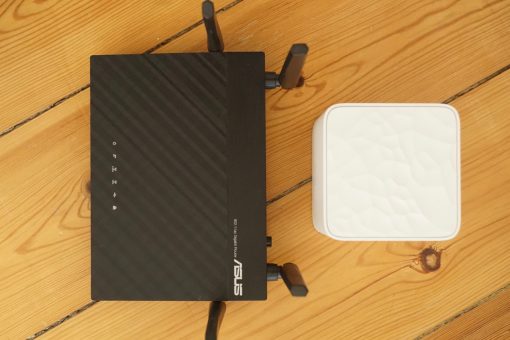 The Asus costs around 70 dollars and is therefore exactly in the range that is appropriate for a modern router. The wireless performance is outstanding, all network speeds are up to date, the operation stable. ac-WLAN is supported with two streams, which is a good partner for most Apple devices. It doesn’t fully exploit 3-stream devices, but it’s best suited for average use. You could say it is well balanced for today’s application scenarios – or “normal” if you like. In any case it is a very recommendable purchase, which covers your apartment with WLAN.