Are you confused by the USB names? No wonder. They have already been renamed twice retroactively by the funny marketing experts of the USB Forum. We give you a quick overview of the existing designations.

The whole misery started with the speed increase of USB 3.0. From 2.0 to 3.0 was clearly understandable: much faster. So now you had USB 3.0 with up to 5 Gbit/s transfer rate and it became even faster. Therefore it was called USB 3.1. As far as clear. The even faster USB version with 20 Gbit/s should be called USB 3.2. Logical somehow, isn’t it?

Then USB 3.0 and USB 3.1 were renamed to USB 3.1 Gen 1 and USB 3.1 Gen 2 – which was quite absurd. And that wasn’t enough: everything was renamed again and retroactively with a higher version number and with the distinction of the versions as generation information. And the highest version even came with an “x” in between to represent the data transfer lanes. We have just made a table to represent the naming scheme:


We would therefore give you the following tip: just orientate yourself on the speeds. Most of the products show the data transfer speed. So you only need to have 5, 10 or 10 Gbit/s in mind. That is what counts. Whether it is called USB 3.1, USB 3.1 Gen 1, USB 3.2 Gen 2 or in the future USB 3.3 Gen Santa Claus doesn’t have to interest you anymore.

By the way, if you think the marketing department had a day off when naming USB4, you’re wrong: did you notice the missing space in the official name? It is called USB4 not USB 4 or USB 4.0 as anyone will call it in everyday use (and even Apple writes it USB 4).

So the question arises, what about USB 4 and the Thunderbolt variants?

Well, USB 4.0 is basically Thunderbolt 3 without the obligation to support a 4K monitor. That’s actually a good thing: it makes Thunderbolt 3 more affordable under the USB4 name and finally truly mass-market. Data rates can reach 40 Gbps. 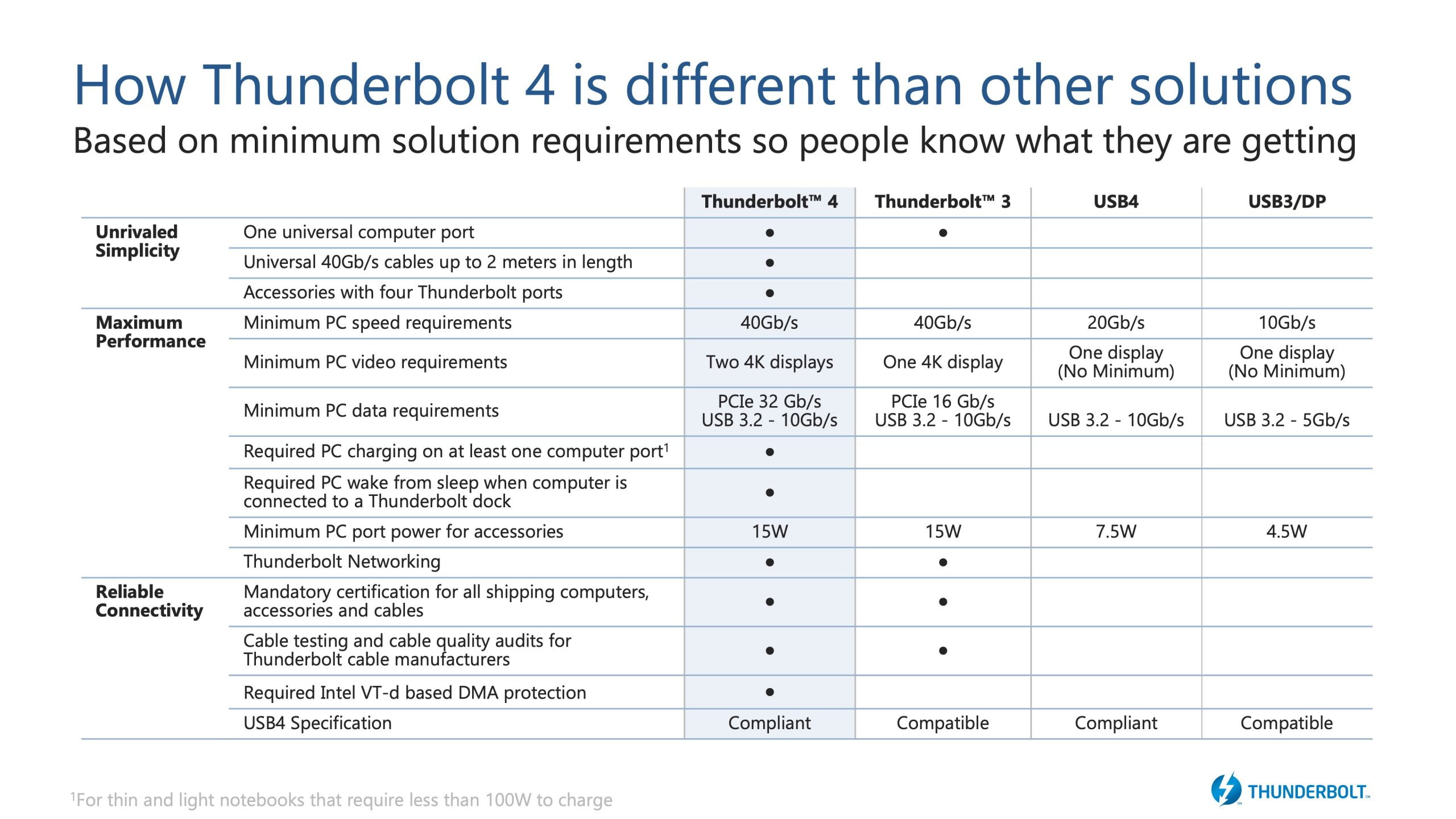 Thunderbolt 4 also stays at a maximum of 40 Gbit/s data rate and brings a few more details compared to the new USB 4 standard (see Intel’s table). For example, 2m cables that support 40 Gbit/s are mandatory and docks with multiple ports (as with USB) are now possible and compatibility with them is also mandatory. In addition, two 4K displays or one 8K model have to be supported.

But since we started with the different speed levels: these are all “up to” specs for USB 4 and Thunderbolt 3 and 4. They can theoretically do 40 Gbps, but only a minimum of 10 Gbps is specified. So here, too, the type designation is only a nice first impression, it is important to check the actual available data rate.

A good example is the first generation of M1 Macs: Apple claims that these have a USB 4 interface. Which is also true from a definitional point of view. But if you are now looking forward to 40 Gbit/s data transfer speed, you will be disappointed: Apple only supports 10 Gbit/s via USB. 40 Gbit/s are possible on the ports, but only via Thunderbolt 3. The end device has to be a Thunderbolt 3 standard device; a USB 4 device also works, but only with 10 Gbit/s. 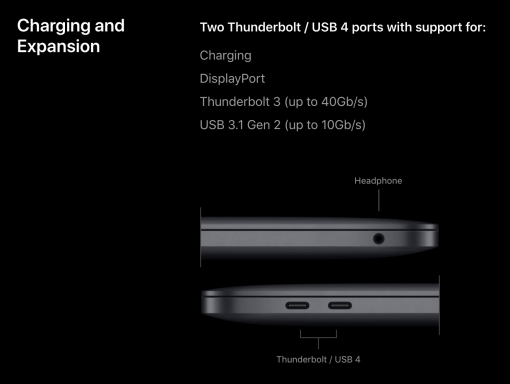 Apple could have simply stated that the device has a Thunderbolt 3 port that is also capable of USB at 10 Gbit/s. This is also how it is done on the website – but only for the MacBook with Intel chip. USB 4 just sounds more modern – but it is the same in this case. 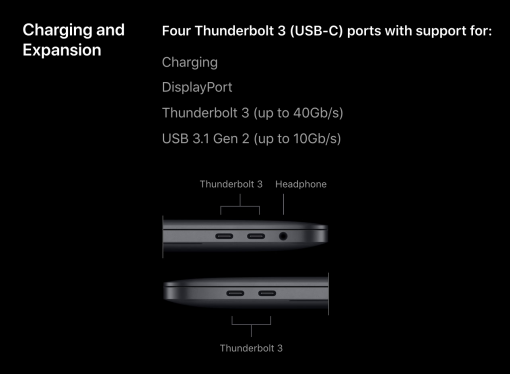 If you want to connect USB 4 devices at full 40 Gbit/s, you have to wait a bit at Apple. The correct designation of the interfaces would look like this: 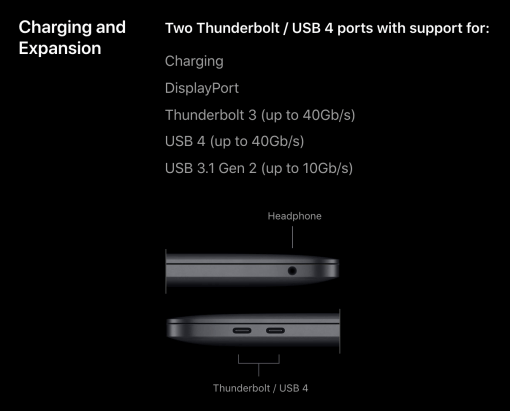 The information on the picture is currently still an error on the American website.

Apple is still using older Thunderbolt 3 chips, which can’t do anything faster than USB with 10 Gbit. The increase will probably happen when Thunderbolt 4 is switched to – we also expect an increase of the data rate to 40 Gbit/s with USB 4. Only with a MacBook that has Thunderbolt 4 and USB 4 with 40 Gbit/s each in the specifications, you do not have to pay attention to anything anymore, since really everything is supported then.