First of all, it’s good that you were looking for this article, that speaks for you. Because you should never be on the road without a backup. A lot of data is simply too important and usually irreplaceable and this should ideally be determined before a data loss occurs.

Here we present you the three best backup programs we have tested. They are all reliable, but have very different focuses that you should choose according to your purpose. You know your workflow best and should decide which program suits you best.

Arq Backup for Mac: Extensive and simple at the same time, encryption available 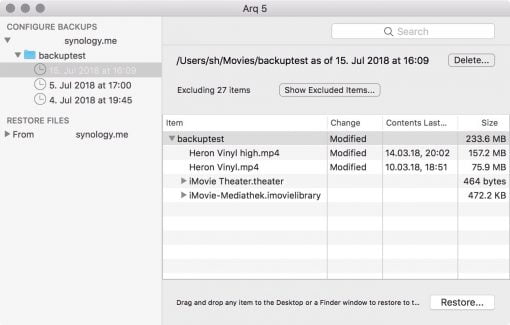 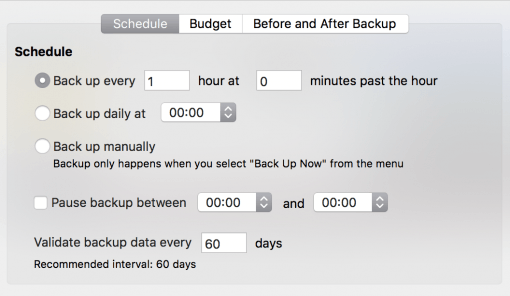 Arq Backup is our favorite program for most applications. It is the most expensive in the bundle (with lifelong software updates even more so), but it also makes the most professional impression. It is the only one that allows you to encrypt the data coming from your Mac before it is stored elsewhere. This also makes it an ideal choice if you want to use an online storage service such as Amazon S3, Google Drive or OneDrive. Users who want to back up to a remote NAS also have a big advantage: They can connect via SFTP and back up the data including all macOS metadata, since Arq backs up independently of the file system. So if you want to back up to a NAS such as Synology and not lose a lot of metadata, Arq is the best – and only – choice.

The user interface looks simple and tidy, but still offers extensive functions. Sometimes you have to click through a submenu, but overall the backup of desired files and folders as well as the recovery (don’t forget!) is very simple. Especially the recovery is practically solved and you get the right option for the situation. Extensive backup schedules, independent for each backup medium, can be set without problems.

So if you’re looking for a program that can make a backup to a local disk at the same time and is also the first choice for an off-site backup either on a NAS or in the cloud, then Arq with its encryption function and file system independent storage is the first choice. The limitations are the creation of bootable media (not possible) and the synchronization of drives that Arq does not offer – only backups are possible.

ChronoSync for Mac: options for everything, Mac as backup target, top support 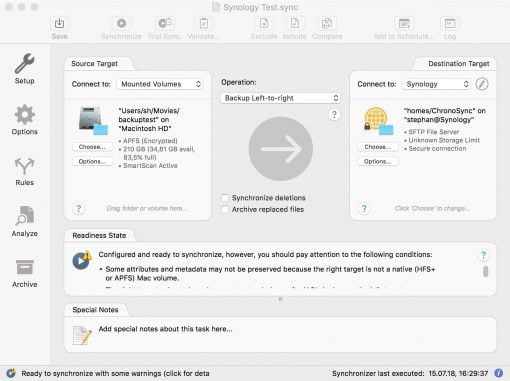 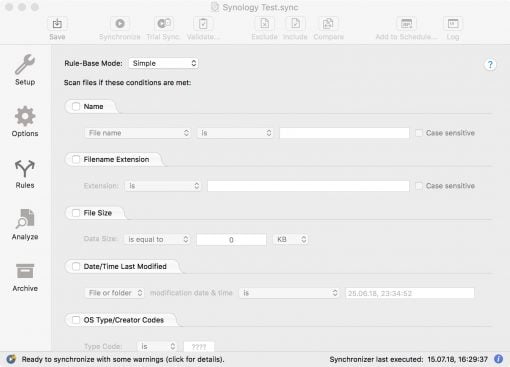 If you do not only want to make backups, but for example as a photographer or videographer constantly handle many drives, which all have to be backed up and/or synchronized with each other, you can reach for ChronoSync with a clear conscience. The software offers so many functions that a solution should be found for every scenario. For example, you can start backups automatically when you plug the hard disk into the USB port and the Mac recognizes it. Bootable backups are also possible. Very practical.

Remote backup via SFTP is also possible, but the data itself is not encrypted. It also backs up at the file system level, so metadata is lost if the destination is not a Mac or Apple formatted hard drive. It is therefore ideal for matching HFS+/APFS formatted disks and for remote backup to another Mac that serves as a backup server.

There is even a small additional program for this: ChronoAgent. It establishes an encrypted connection between both Macs over the Internet. Since the volume can be encrypted on the target Mac, the disadvantage of non-existent encryption of the actual data is eliminated. From 10.8 ChronoAgent runs on an older Mac, so you can simply switch it off for data backup. There is also an iOS app that allows you to access shared data. So if you handle a lot of media and/or want to build your own cloud with a Mac, ChronoSync offers you an extensive package – and excellent customer service. 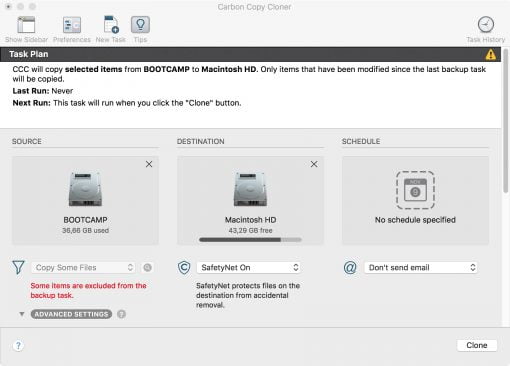 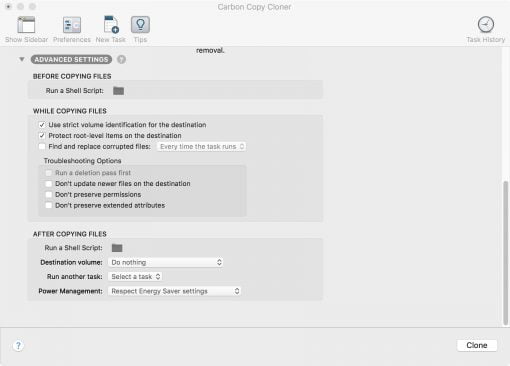 Carbon Copy Cloner is the cheapest of the three candidates. However, it offers a very clear interface that is a bit better to use than ChronoSync’s, but the option list is far less extensive.

But that doesn’t mean you are limited: Carbon Copy Cloner is also a good choice for clean timed and synchronized backups, and it allows the creation of bootable media.

However, with this programm too the storage is not platform-independent: so if you store on a Linux NAS, your metadata is gone. A remote backup is also not possible: neither via an additional program nor via standard SFTP. Encryption is also not planned. The bottom line is that it is a simple and stable program for local backups.

SmartBackup is completely free of charge. The very minimalistic program simply makes a copy of the desired folder on file level. So you can view the files in the backup folder. It is not possible to encrypt or backup in clouds.

Minimalist. Also with the price.

Nevertheless the program offers a very practical function: the creation of a bootable backup. It not only backs up your data but also your workability, should something go wrong.

Have we already mentioned that it is completely free? This should tempt you to try the program first. For most simple backup requests it is more than enough.